In many regions of the so called advanced world, there is a growing recognition that traditional rural skills are being lost and that something needs to be done to preserve and record them. Not only that but also an understanding that unless these crafts are practised and promoted they will finally disappear. For example a 2006 conference on the decline of the traditional craft of dry stone walling in the UK reported that there is no legislation to protect dry stone walls and:
“the extent of the damage to the network by dereliction, removal and theft, now poses a major threat to this important part of Britain’s cultural heritage.” (Aliston, 2006)
Alongside this problem with walls, English Heritage reported a fall of 13% in the number of starting apprentices and trainees in craft related skills in England between 2005-6 and 2006-7. (Construction News, 2007)

Slovenia was part of the Habsburg Monarchy for 650 years and from 1867 -1918 part of the Austro-Hungarian Empire. For most of that time, particularly in the Kras region, there was a high proportion of oak forest. Even today, 75% of the country is wooded. Since Roman times the oak had been used for housing and shipping. Particularly in the nineteenth century the remaining oaks were replaced with non-native Black Pines. The most important period for the development of Kras stone culture began under the rule of Empress Maria Theresa (1740-1780). This marked the end of the feudal system and much of the land which had been owned by the aristocracy was purchased by local people. The land was divided into lots by Imperial surveyors. The new owners began to clean their land from the massive limestone rocks breaking them into smaller pieces with hammers picks and sometimes using gunpowder. They built dry stone walls .The rest of the stone was gathered into huge piles called Grublja (Figure 2 - Grublja). The rocks were also used to create dry stone shelters for the farmers and their children, who helped to control the livestock.

As Zupančič has said:
"There is a simple logic here: useless heaps of stone could be better used to mark plots or create some shaded niche to protect against the weather. Division of labour was by sex and age. Usually, children cleared the fields and then the father (the owner) did the walling."(Zupančič, 2010)
The climate in the Kras region is very hot in the summer with heavy rainfall in the spring.  An unusual feature is the strong cold wind (Burja) which can blow at any time of the year. The huts were built by the locals to protect themselves from the intense heat and the bitterly cold wind. The oldest surviving huts are approximately 170 years old and were in use into the 20th century until the population movement   into towns away from agriculture became common. Until now, almost all of these huts (Hiška) have been neglected and are falling into ruin. As Zupančič has said:
"With changed habits over the last sixty or seventy years, the vast development from homo domesticus to homo commuter, local knowledge and cultural awareness have almost faded away. The end result is seen on the ground: many of these elaborate stone structures were no longer needed and have become overgrown with bushes and creepers."
(Zupančič, 2010)
In 2010, I attended a dry stone walling Congress in Cumbria. Two of the lectures were given by Professor Borut Juvanec and Domen Zupancic, both of whom are attached to the Department of Architecture in the University of Ljubljana. They described the corbelled huts of the Kras region and pointed out that many of these were in a poor state. They also explained that during April 2011 they would be organising a group of students, along with knowledgeable locals to restore a number of hiška and help others to understand the principles involved in their construction. Through a generous grant from the Winston Churchill Memorial Trust I was able to join this group.
On the first Monday after my arrival in the small Slovenian village of Lokev, before the students arrived, I had the privilege of observing a hiška (Figure 3 - Hiška) being built in a garden by local school children under the guidance of Boris Čok (pronounced Chalk). Boris, now retired, had sheltered in these huts as a child helping to look after his family’s sheep and cattle. In 2009 he was the first to contact the Ministry of Culture of the Republic of Slovenia about the forgotten beauty of these herdsmen stone shelters. They were first recorded and  registered by Eda Belingar and Boris Cok. Boris had already repaired a number of huts in the surrounding area of pine woodland. Over the next few weeks Boris Cok, Mitja Kobal, Dusan Okoren, Pino Hrovatin, Professor Borut Juvanec and his assistant Domen Zupancic, a group of Architecture students and I rebuilt several hiška, closely viewed and recorded by local and national media (TV Primorka, TV Rai 3, Primorske Novice, Delo, Dnevnik, Kras, Dragodid).

The size required for the foundation was determined by the proposed height of the doorway, the number of people requiring shelter and whether these were adults or children. An upright was driven into the ground. Two concentric circles were drawn on the grass to coincide with the width of the walls and a gap was left for the door space, relating to the direction of the burja. The proposed door height gave an indication of the width of the walls. This was between 40cm and 90 cm. The turf was then removed (Figure 4) and the top soil dug out until firm material was reached (either sub-soil or rock).  The two circles of foundation were then laid, leaving a gap for the doorway, but using a large rectangular rock of the perfect width on both sides of the entrance where these were available. Hearting was then carefully placed between all the foundation stones.


Stage 2
Walls up to the top of the door lintel

As was common in Slovenia, the walls were erected with a very slight batter. Care was taken to create a smooth surface, particularly on the internal surface. As most of the rock was irregular limestone, it requires some skill to make the sides flat and because of this, the best rocks were used on the inside. Naturally, the stones with squared ends (Figure 5 - Square End Stones) were selected for the doorway on each side. Once the top of the door was complete, one or two lintel rocks (gurenc in Slovene) were lifted into place. The walls were then completed to run right round the structure making an entire flat loop round the hiška.

Where possible, large flat rocks were arranged all the way round the loop with a slight overhang on the outside.  After this first layer, much smaller stones were placed in concentric circles all the way round. It was important that small wedge shaped fragments were put under each stone added, to ensure that any water would be directed to the exterior. On the outside of each layer, stones were placed to make the overall view a neat circle.  These rocks on the bearing wall were positioned to act as a counter weight for the stones overhanging the corbelled dome.  Normally one person would stand inside the hiška with a bucket of wedges and as those outside put on the stones, the person inside would insert the wedges.
As the roof was raised and rocks were placed with a small part overhanging the centre, then the hole became smaller and smaller (Figure 6).

The person inside had to be tall or stand on some support, depending on the height required. Finally the last rock was laid carefully to close the top, leaving an internal corbelled dome.  (Figure 7)

Stage 4
Finishing the roof outside

While the dome was being created, those outside were adding stone and rocks to ensure that the entire build looked smooth and that there was enough cover to prevent the entry of rain water, irrespective of the wind direction.  (Figure 8)

Many of the huts had unusually shaped limestone placed on the very top.  This was not only for decoration but to recognise the builder and owner of the hiška.  Every hiška had a family name and some of the huts around Lokev had fireplaces.   Some had inscriptions and several were different shapes depending on the adjoining rocks. The largest hiška which I saw was square shaped with a flat roof this could accommodate at least 12 adults.
(Figures 9-12) 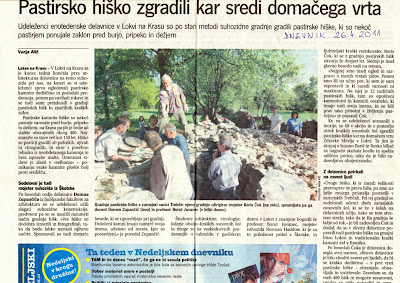